Frontline philanthropist, entrepreneur and Chairman of Ned Nwoko Foundation, Prince [Dr] Ned Nwoko on Wednesday January 8, 2020 morning landed in the Antarctica for the symbolic flag-off his multi-billion naira malaria eradication in Africa project. He goes down in history as the first Nigerian to explore the Antarctica continent.

The former member of House of Representatives had earlier departed Abuja enroute Cape Town, South Africa on Sunday 5th January, 2020 for the historic expedition. He was accompanied in the epoch-making expedition by a team of top scientists from Russia, India, China, USA and UK.

The highly anticipated expedition to Antarctica reputed to be the first by any Nigerian began at exactly at 12:09am as the specially equipped jet carrying the founder of Stars University, Idumuje-Ugboko, Delta State, Nigeria and his co-explorers took off from Cape Town. Prince Ned Nwoko, a renowned educationist, public health advocate and environmentalist is championing malaria eradication in Africa through his foundation.

Ned Nwoko who is also a notable patron of sports, culture and tourism will use the expedition to draw global attention to the scourge of malaria in Africa and his two-pronged approach to end the scourge which are fumigation of Africa and funding research endowments for malaria vaccine in five universities across Africa to the tune of $750,000. 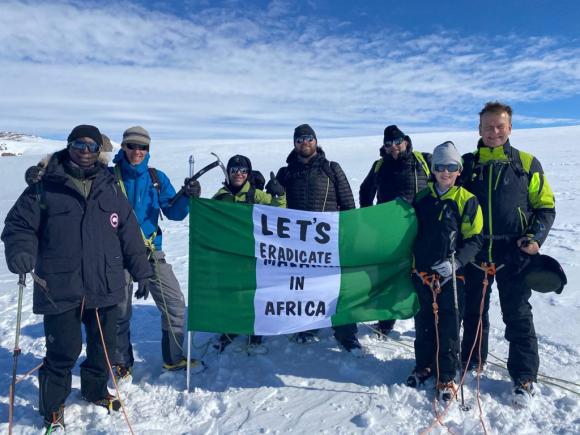 As they boarded the jet, Prince Ned Nwoko introduced himself to the Americans who are going to the South Pole as well for the first time and followed up with a question jokingly. He said, “Are you Republican or Democrat? Answer so that I will know what to say in the plane“. The poser elicited hilarious laughter for a while before the co-explorer responded to the jocular question with an assurance that Prince Ned Nwoko is in good hands.

Multi-media agency reports monitored by correspondents indicated that preparatory to take off from the southernmost tip of Africa for the expedition, Dr. Ned Nwoko underwent safety briefing on the daring trip out of the earth’s surface to the ice-filled Antarctica. After the briefing, the billionaire was spotted with Captain Hamish Harding and teenage record breaker, Giles Harding who is set to make history as the youngest human ever to visit the Antarctica. 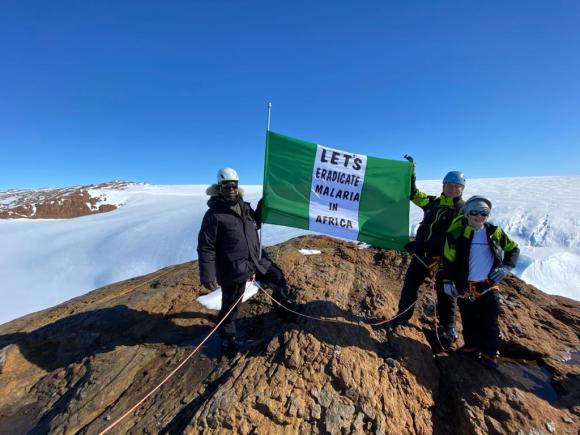 The Delta-born former federal parliamentarian stated in Cape Town just before takeoff, “Malaria is majorly African problem. If you understand that, then you will comprehend why there is no concerted effort to find a permanent cure to it. If you look around, you will discover that most of the companies producing malaria medications are foreign based. Could it be that if there is a vaccine those companies would face imminent closure? Late last year, the Egyptian airline resident manager died of malaria in Abuja. There is no family that has been spared. No family that has not lost some loved relatives.”

The fact that it is often forgotten by many that malaria is the biggest killer disease in Africa, irks the mind of the eminent philanthropist who has vowed to awaken the continent and the world as a whole on the dangers posed by the pandemic. It is the need to draw global attention to the monumental health challenge and the imperative of finding a permanent solution to it that nudged him to courageously embark on the risky audacious expedition to the Antarctica to formally launch the malaria eradication campaign.

To him, the journey towards a malaria-free Nigeria and Africa is not just worthwhile but realistic. In the gargantuan project, the Ned Nwoko Foundation will work with national and multilateral organizations to realize its goal of ridding Africa of mosquito and malaria. “We will equally collaborate with governments, private organizations and civil society towards achieving our core objective of extending malaria intervention programmes beyond the threshold of control and palliatives. We have our eyes fixed on permanent solution to the age-long scourge,” he vowed as he left the African shores for the Antarctica about midnight on Tuesday.

Recent statistics shows that the six highest malaria burden countries in the WHO African region (in order of estimated number of malaria cases) are Nigeria, Democratic Republic of the Congo, United Republic of Tanzania, Uganda, Mozambique and Cote d’Ivoire. These six African countries account for nearly 50% of malaria cases worldwide according to recent World malaria reports by WHO. The reports show that children are the most vulnerable group affected by malaria. For centuries, apart from malaria, mosquitoes have been the cause of several other ailments ravaging Africa such as Yellow fever, Dengue fever, Filariasis and Zika. 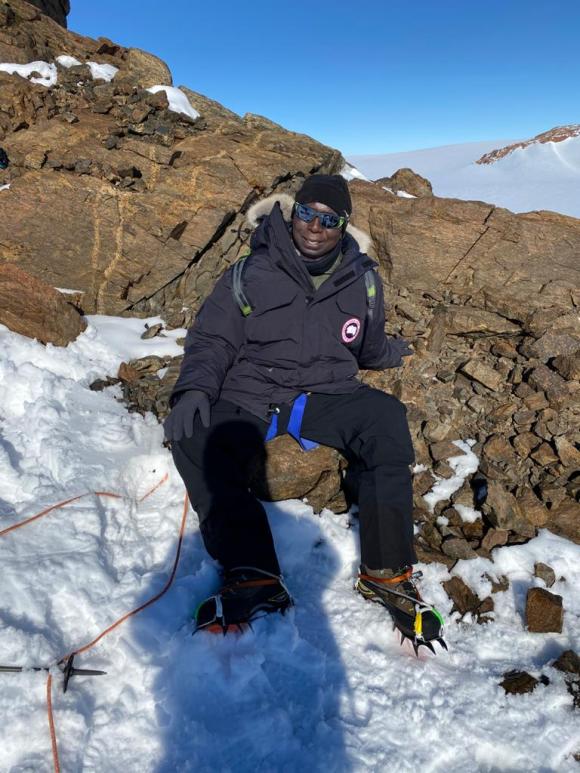 Prince Ned Nwoko said that each time he meditates over the debilitating effects of the scourge of malaria in Nigeria and Africa, certain questions come to his mind including the following: Must Africa continue to reel under the burden of malaria scourge in perpetuity? Beyond the current treatment and control measures, can’t more efforts be put on researching for reliable vaccines against the disease? Since mosquito is the vector that transmits malaria infection, what can we do to eliminate or drastically depopulate the vector on the African continent?

The search for answers to these posers inspired him to embark on the malaria eradication project. And he is very confident that he can succeed in the challenging task given the people’s collective resolve and commitment. To him since malaria is basically an African problem, no people are better positioned than Africans themselves to take the front seat in seeking a permanent solution to Africa’s most formidable health challenge – malaria.

Prince Ned has set short and long term objectives for the Ned Nwoko Foundation in this project. The short-term delivery plan shall be National mobilization for the fumigation of Nigeria and other African countries. To achieve sustainable success, community members will be made stakeholders of their environments in the mosquito elimination campaign. Community town hall meetings shall be held to appoint Sanitation Ambassadors and Officers.

The Ned Nwoko Foundation’s long-term plan in delivering this project is investing in development of anti-malaria vaccine. The Foundation plans to establish Academic Research Grants for Malaria Vaccine in universities spread across the African continent. The grants shall be available to be accessed by scientific scholars in Africa. There shall be a proper selection process and body of judges for the most qualified students and researchers to access the grants.